A Dual-Tuner card will solve all your trouble; it’s a DVR that records two TV programs to the DVR Hard Drive at the same time. Two television shows can be programmed to record in the same time slot, or one show can be recorded on one Tuner while you watch a program on the other Tuner. With a Dual-Tuner card, it is also possible to watch a pre-recorded TV show while the two Tuners are recording other shows. Finally, Dual-Tuner card allow users to switch between Tuners to watch two different TV shows concurrently.

Where to find the dual tuner card? Have any suggestions? 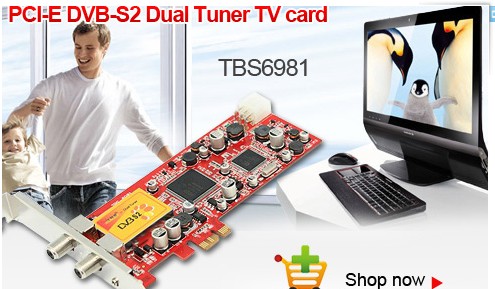 How to use tbs6981 dual tuner card to watch satellite TV?

Set your satellite dish aimed at the right satellite. Connect dish LNB to PCI card “LNB IN” with cable.

After finished the process, you can watch satellite TV on DVBDream with the dual tuner card.

1. How to watch MythTV television with TV tuner card?

2. How to watch HDTV programs with HDTV Tuner Card