Wiliam and Kate will hold a grand royal wedding on April 29. Everyone is looking forward to seeing this century wedding, to see Prince and Cinderella enter the happiness marriage hand in hand. 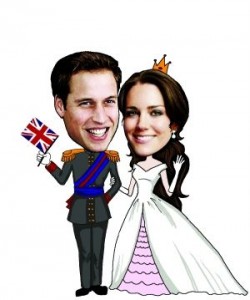 But we’re curious about how William and Kate know each other, how they come together finally after 9 years on and off?

Since meeting in 2001 at university in St Andrews Prince, William and Kate Middleton’s relationship has been heavily scrutinized. Here is a timeline of major events marking their romance.

Kate persuades William to stay at university after he admits finding it difficult to settle. He later switches to a geography course.

September 2002: They move into a student house with two other friends including former Etonian Fergus Boyd.

June 2003: Clarence House denies that William is romantically involved with close friend Jecca Craig, the daughter of wealthy conservationists based in Kenya.

June 2003: Kate attends William’s 21st birthday party at Windsor Castle.• The Prince insists in an interview to mark his birthday that he does not have a steady girlfriend.

September 2003: William, Kate and their two flatmates move into a cottage in the third year.

Christmas 2003: William and Kate are believed to have become an item after she splits from her previous boyfriend, a former St Andrews student.

March 2004: William and Kate’s relationship is revelaed after they are pictured skiing in Klosters together. Clarence House do not deny they are dating. On the same holiday, William is reported to have said: “I don’t want to get married until I’m at least 28 or maybe 30.”

April 9, 2005: Kate is not invited to the wedding of the Prince of Wales and Camilla Parker Bowles in Windsor.

October 2005: Kate’s lawyers – the same used by the Prince of Wales – ask newspaper editors to leave her alone, claiming she is being hounded by photographers.

January 2006: William is photographed kissing Kate in public for the first time during a skiing break in Klosters.

March 2006: Kate, without William, is invited into the Royal Box at the Cheltenham Gold Cup. Also there is the Prince of Wales and the Duchess of Cornwall.

April 2006: The pair holiday in the Caribbean hideaway island Mustique.

May 2006: William and Kate attend the wedding of the Prince’s stepsister Laura Parker Bowles together.

August 2006: They holiday in Ibiza ahead of William’s final term at Sandhurst.

November 2006: Kate gets a job as an accessories buyer with Jigsaw, the fashion chain owned by friends of her family.

December 2006: Kate makes her most significant appearance to date as she turns up to watch William graduate as an Army officer at Sandhurst.

March 2007: William starts Army training at Camp Bovington, Dorset. The pair are pictured at the Cheltenham Gold Cup together.

June 2007: The couple are reported to be dating again

11 April 2008: Kate watches as William receives his wings as a qualified RAF pilot from the Prince of Wales – this was her first appearance at a formal event with Prince William since December 2006

June 2010: The couple move in together into a cottage in north Wales close to Prince William’s RAF Valley in Angelsey.

October 2010: The couple become engaged after William proposes while on holiday in Kenya.

20 February 2011: First invitations to the Royal wedding sent out.

11 pril 2011: Royal couple visit Lancashire on their last official trip before the wedding.