The Champions League Semi-final get started on April 27,let us to predict which two teams will win the game. 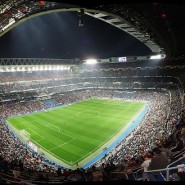 Champions League in every sense of the word

The ‘El Clasico’ is said to be the greatest football rivalry in history and has cemented its place as being the most anticipated match of the year. However, this year’s battle will not only commence in La Liga, not only in the Copa Del Rey Final but also the biggest Club competition in the world, the Holy Grail, the Champions League. When on the 27th of April at 20:45 these two giants will take to the pitch for the first-leg battle at the Santiago Bernabeu.

Only this ‘el clasico’ will have an added ‘special’ ingredient that has been missing in there past European Cup adventures, the self proclaimed ‘Special One’, Jose Mourinho. Jose Mourinho has taken snipes at Barcelona over the past weeks, masterminding his thoughts over the media making this encounter even more exciting. This tradition is steeped in history & the rivalry between the two teams is colossal. Just the thought of the pig’s head being thrown at Luis Figo at the Nou Camp is a crystal clear example as to how deep feelings lie between the two.

The two giants have met each other three times before in the Champions League, the most recent being in the 2001/02 season, which saw Real Madrid come out triumphant and go onto win the trophy beating Bayer Leverkusen 2-1. The meeting between the two in the second–leg of their semi-final battle was dubbed by the Spanish media as ‘the match of the century’. However times have changed since then with Barcelona playing the most sumptuous and sought-after football in the world, humiliating their rivals 5-0 at the Nou Camp earlier this season. With Barcelona winning the competition twice in the past 6 years, in a time that has seen Real Madrid crashing out at the first knockout stage of this competition in the past 5 years, something few would have believed could happen to the Spanish giants, it has left the contest between the two wide open for another unmissable encounter.

Quality throughout both clubs

It goes without saying just how much quality both teams possess with superstars lining up for the pair with Puyol, Xavi, Iniesta, Villa and Messi lining up for the Catalan titans, they are one of the toughest teams to crack in this competition. On the other hand we have the vast talent that Real possess with Casillas, Carvalho, Alonso, Di Maria, Benzema and Ronaldo, to name just a few.

With Barcelona being tipped as the favourites to win the Champions League from the beginning of the season it is hard to see anyone beating them over two-legs, especially at the Nou Camp. Jose Mourinho, however, may be the man for the job, not shy of hiding what it would mean to beat Barcelona.  An incredible prospect, to knock them out just as he did last year with Inter Milan, when he went on to lift the trophy for the second time with two different clubs. Can Mourinho make it 3 in 3 or will Pep Guardiola’s Catalan titans have the last laugh. It’s too close to call however and only time will tell, this is ‘El Clasico’ after all.

1.How to Watch UEFA Champions League Live Online on your PC