In our latest Monday post on Spanish soccer, Iain Rogers in Barcelona muses on the ill-tempered Champions League clash between arch rivals Barcelona and Real Madrid and the possible repercussions for the Spanish national team and looks at the unrivalled brilliance of World Player of the Year Lionel Messi.

Last week’s Champions League semi-final first leg between Real Madrid and Barcelona made headlines for all the wrong reasons. 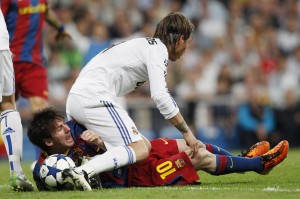 The bad blood that had boiled up between the arch rivals before the game at the Bernabeu, watched by millions around the world, spilled over into some ugly scenes on the pitch.

Tension had been building between the Spanish giants after last month’s 1-1 La Liga draw in Madrid and the King’s Cup final in Valencia, which Real won 1-0 in dramatic style thanks to Cristiano Ronaldo’s header in added time.

Real’s outspoken coach Jose Mourinho upped the ante before the Champions League game by baiting his Barca counterpart Pep Guardiola, who abandoned his customary restraint and lashed back at the Portuguese at his own pre-match news conference.

European soccer’s governing body UEFA opened probes into both clubs the day after the match, which included a scuffle at halftime that resulted in a red card for Barca reserve goalkeeper Jose Manuel Pinto, the sending off of Real’s Pepe for a wild tackle on Daniel Alves and Mourinho being dismissed from the bench for protesting the decision.

The former Chelsea and Inter Milan manager then produced an extraordinary post-match rant in which he suggested there was a UEFA conspiracy favouring Barca and belittled Guardiola’s achievements at the helm of the Catalan club.

Barca and Real filed complaints about each other that were dismissed by UEFA on Monday.

The neutrals watching on television must have been sorely disappointed that two of the world’s top sides, fielding many of the most talented and best-paid players in the game, were unable to provide a more gratifying spectacle in the last four of Europe’s elite club competition.

It all seemed a far cry from Spain’s triumph last year in South Africa, when Barca and Real provided most of the players who secured the Iberian nation’s first World Cup.

One of the strengths of their campaign was the harmonious atmosphere created by coach Vicente del Bosque and they were a friendly, jokey bunch at their training base in the leafy university town of Potchefstroom.

Del Bosque was no doubt perplexed to see David Villa, Xabi Alonso, Xavi, Sergio Ramos and Alvaro Arbeloa, among others, losing their cool with each other, and Spain captain Iker Casillas had to intervene several times to calm the situation.

“These rows between my players worry me,” Del Bosque was quoted as saying in local media. “All I hope is that they don’t spill over into my dressing room. The close-knit nature of the group is key and one of the foundations of our success.”

The off-ball incidents distracted attention from one of the great Champions League goals, scored by World Player of the Year Lionel Messi in the dying minutes.

The Argentina forward left several Real defenders trailing in his wake before slotting a dinked shot past Casillas with his weaker right foot.

The goal, reminiscent of the one scored by his compatriot Diego Maradona against England at the 1986 World Cup in Mexico, prompted Argentina coach Sergio Batista to declare that Messi, still only 23, would one day be regarded as the best player in history.

“Given what we already know and because he surpasses himself day by day, he’s already the best in the world,” Batista told Argentine radio.

“I left the stadium telling myself, ‘Thank God players like (Barca pair) Xavi and Messi exist’. They give you goose bumps, they thrill anyone.”

1.How to Watch UEFA Champions League Live Online on your PC

2.UEFA Champions League Predictions: Who Will Win the Semi-final