There are MTV HD and MTV Music HD channels broadcasted on Atlantic Bird 1 satellite 12.5W. This transponder is broadcasted with Multi Input Stream (MIS) mode which means a standard satellite receiver or satellite TV tuner which normally doesn’t have Multi Input Stream feature can’t receive these programs. But with TBS6925 which is a professional level DVB-S2 TV Tuner card you can receive MTV HD and MTV Music HD easily if only you’re under the footprint of Atlantic Bird 1.

It seems to be covering the whole Europe including Iceland, North Africa, Middle East, Western part of Russia, Eastern part of North America including part of Canada, Cuba, Dominica, part of Mexico and the whole South America. Check this link http://www.eutelsat.com/satellites/125e_popd.html# in some weak signal region you may need a big dish. But the following report was done on site in Europe by cody, so there is no guarantee that you can receive the same transponder elsewhere.

Before you may start your scan, it’s recommend to download the latest driver and TBSrecorder from TBS download zone(link to https://shop.tbsdtv.com/download_center.html)

Here are the screenshots and guide about how to filter MIS stream and watch/record it with DVB player.

1) Use TBSRecorder to lock the MIS frequency and after that choose “Input Stream ID” from the drop-down box and press “Apply” button – in the example MIS ID of 34 is selected: 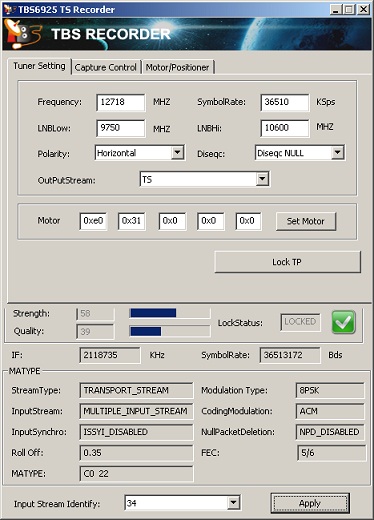 2) Close TBSRecorder. It’s not necessary to run it anymore after the MIS filter is set, i.e. the “Input Stream ID” is selected and applied.

3) (Optional) check with TransEdit that the correct TS stream is filtered (this step is not really necessary). 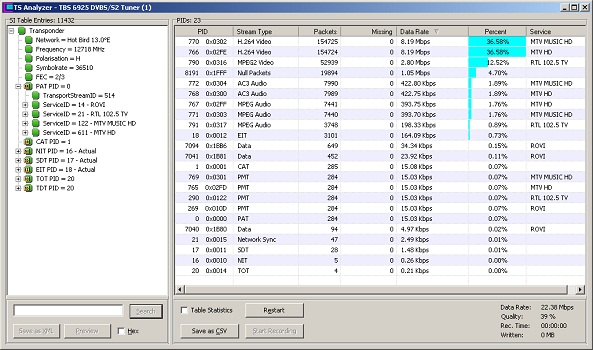 After check, you need to close TransEdit.

4) Open your favorite DVB player software (in the example TBSViewer is used, but of course you may use other software like DVBViewer, DVBDream, ProgDVB…) and then scan the same transponder from 1).

scan is finished and four channels are found: 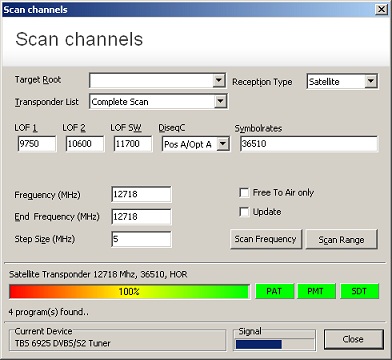 the list of found channels including MTV MUSIC HD and MTV HD.

5) select MTV MUSIC HD or MTV HD channel from the list and watch it, currently they are not encrypted and you can watch these crystal clear HD channels free.

6) screenshot from MTV HD and MTV MUSIC HD, which are available on the MIS transponder from the example:

7) if you want to change selected MIS ID you need to repeat the step 1) and also if you don’t have the channels from that MIS ID in your channel lists, re-scan in your favorite DVB player software.

It’s very easy for you to use the record or scheduled record features of the DVB player software for PVR. 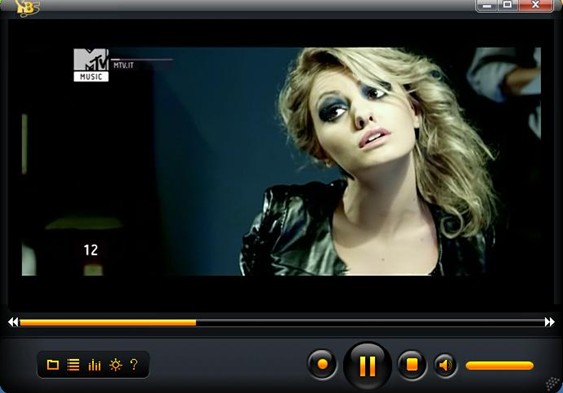 Useful guide:
1.How to Run TBS 6925 Digital Tuner card on Linux and Ubuntu
2.How to Use the TSRecorder Tool to receive CCM, VCM and ACM signals
3.How to Use TBS6925 watch satellite TV with XBMC and MythTV
﻿