Turn off your computer and unplug it from the wall. Open up the case and look for a short, white card expansion connector on the motherboard. Next to it should be at least two more white connectors that look similar but are longer. If this connector is already being used by another card, you can still install your tuner in a long connector. The PCIe TV tuner card will still run as a PCIe x1 when installed into the longerx4/ x8 or x16 connector. 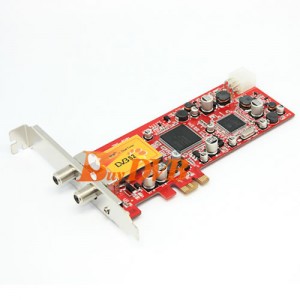 Remove your tuner card from its anti-static bag and line it up with both the motherboard connector and its associated expansion card slot. The slot is the hole that the TV tuner card’s ports will stick out of when the card is installed. If there are any clips or a plastic swing-arm on the tops of the card slots, release the slot’s clip or pull up on the swing-arm. Push the card down into the connector so that the card’s metal bracket fits into that slot. Secure it with the slot’s clip or put the swing-arm back into its original position.

Plug in your computer and power it on. Attach your TV signal source to one of your new tuner ports using a coaxial cable. If your computer tv tuner came with a remote control, plug in the Infra Red (IR) receiver into its port on the card, which is located on the card’s bottom. Allow your computer to boot into Windows and then insert the drivers disc and install the drivers.

Click on the “Start” button in Windows and type “Media Center” into the search box. Press the “Enter” key to load Windows Media Center. While in Media Center, go to “TV + Movies” and then click on “Set up TV.” From there, follow the prompts to choose a local programming guide and find channels.

Run the IR Configuration Utility by clicking on “Start” and then typing its name into the search box. When the program comes up in the search listing, click on it to start. When the dialog box appears with a message saying it detected one remote, click on the checkbox and then click on “OK — Save Changes.” Restart your computer before attempting to use the remote.

How to set up a TV Tuner Card for Computer

How to to watch satellite TV on AltDVB with TBS 6981

How to Use DVB Dream