This article has two parts, from it, you’ll have a more clear understanding of DiSEqC and Multi-Switch.

DiSEqC(Digital Satellite Equipment Control),pronounced “Die-Sec”, is a special communication protocol for use between a satellite receiver and a device such as a multi-dish switch or a small[1] dish antenna rotor. DiSEqC was developed by European satellite provider Eutelsat, which now acts as the standards agency for the protocol.

DiSEqC relies only upon a coaxial cable to transmit both bidirectional data/signals and power. DiSEqC is commonly used to control switches and motors, and is more flexible than 13/18 volt and 22 kHz tone or ToneBurst/MiniDiSEqC techniques. DiSEqC is also compatible with the actuators used to rotate large C band dishes if used with a DiSEqC positioner. Despite its name, it has been used on fully analogue or only partially digital-capable (Astra Digital Radio) satellite receivers.

A number of variations of DiSEqC exist:

A multiswitch is a device used with a quattro LNB to distribute satellite TV signals to multiple (usually more than four) receivers from a single dish and LNB.

A typical Ku band universal LNB can be switched between four modes (two frequency ranges and two polarisations) selected by signals from the receiver (supply voltage for polarisation and presence or absence of a 22 kHz tone for frequency range). This means that each receiver needs a separate feed and twin-tuner receivers (such as sky+ and freesat+) need two separate feeds. For small numbers of receivers a multi-output LNB is used and all the feeds are taken straight from the LNB but there is a limit to the number of outputs that can reasonably be placed on a LNB.

Part2: What’s the difference between DiSeqC and multi-dish Switch?

There is a big deference and the two cannot be compared.   Make sure that you buy the correct device.

* A DiSEqC switch is a device which enables you to connect multiple LNBs and combine them to be used by one decoder.

* The DiSEqC protocol allows for remote control of the DiSEqC switch from the decoder.

* For example: The DiSEqC 4X1 Switch Diagram will enable the user to select one LNB signal between 4 different LNBs of any type and send it to the decoder. 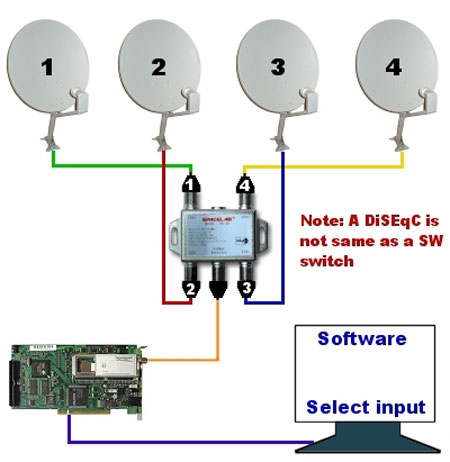 Our buydvb online store provides all kinds of Gecen DiSEqC Switch,you can choose the suitable one for you.

* A Multi-Switch is usually used with DISH Network or DirecTV systems. It can be used with Free To Air system.

* When using a multi switch, the first port is always controlled by 13V & the second by 18V DC (1 for each polarity).To receive both polarizations (H/V or R/L) you must have each port connected to a LNB.  It means you have a cable for horizontal and a cable for vertical.

* This is one way to connect more than one decoder to a dual LNB. A single LNB will not work on both polarizations. 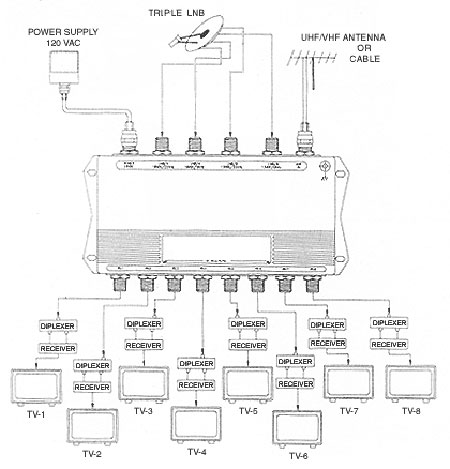 A MultiSwitch On Sale: