The dream is starting to become a reality… This bad-boy is a TBS6984 satellite tuner card designed to receive both ordinary DVB-S signals AND the high definition DVB-S2 signals used by C4HD and BBC 1 HD. More importantly, it has four separate tuners on-board allowing you to plug it in to a quad LNB to record channels from 4 multiplexes simultaneously.

It’s probably best I jump back a bit here and remind you of what I’m trying to achieve. You may remember the new 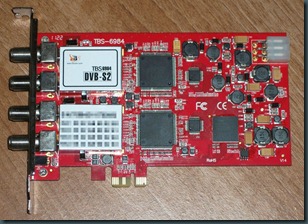 home server with 6x 2TB drives in? Well all that storage wasn’t for nothing – I plan to use the server for not only storage and media streaming, but also as a TV Server. The TV Server will contain a number of tuner cards, and stream TV over regular Ethernet cabling throughout the house to PCs, laptops, or specially built home theatre PCs connected to TVs. The idea is that the server becomes the only place in the house where aerials / satellite cabling is terminated, and ordinary Ethernet cables take care of the rest of the house. Want to watch a program you recorded in the lounge but you are now in the bedroom? Not a problem, all recordings are held centrally on the server.

So, step 1 is complete – I have a server. Step 2, fit the server with as many digital TV tuners as possible is underway. I already have a standard definition Freeview tuner (DVB T2 tuner cards) in the server, but I wanted HD and the most reliable way to get that here in South Wales is via satellite. The TBS6984 is a beast of a card, requiring a full-height PCI Express x1 socket AND a dedicated PCI Express power supply. As you can see from the image on the right, at the top-right of the image you can see the internal power input connector. Now, luckily my power supply has two such outputs, usually reserved for high end graphics cards. I plugged my power supply straight in to the card and away it went. For those of you without a spare PCI Express power output, you have the option of using the provided Molex adapter – you will need THREE spare Molex connectors though! (

Once installed, you’ll need some software to go with it. It supports Windows Media Center with no playing around – now I’d suggest when you do install the card, you install just the drivers and not the supplied software package. Let Windows take care of the rest because the interface is superb. Sadly for me, though, Windows Media Center does not support Windows Home Server and the in-house distribution features I am after. I may have mentioned this before, but I have chosen MediaPortal as the TV Server of choice. (For reference, I’m using the release candidate of 1.2.0 and not the older 1.1.3 which doesn’t appear to work very well with DVB-S2 high definition satellite broadcasts for me).

Now, the major stumbling block for satellite broadcasts is the EPG (Electronic Program Guide). Freeview broadcasts as EPG, Freesat and Sky also have EPGs, but MediaPortal can’t use the Freeview one for satellite (it just doesn’t have all the same channels) and no-one has managed to write a simple EPG plugin to read Sky or Freesat’s EPGs… so the solution is to grab an XML based one off the web. Luckily MediaPortal has a plugin called WebEPG which does this, but you will need to manually map your channels to the relevant XML feed which is straightforward enough.

So, buying this DVB S2 card… now, it isn’t cheap,US$249.99, and when I purchased this a few weeks ago there were only two options: eBay or BuyDVB , I chose buying direct from www.buydvb.net using PayPal – it was quick delivery and cheaper than eBay. It seems the store is the official website of TBS. but I am not sure. It’s also worth noting that if you don’t plan to use it in a server, then it comes with a useful remote control, and that you can get single and dual tuner versions too. I’d highly recommend this card overall – especially as it allows you to crab four tuners in to a single expansion slot.

This review is contributed by Olivershingler>>