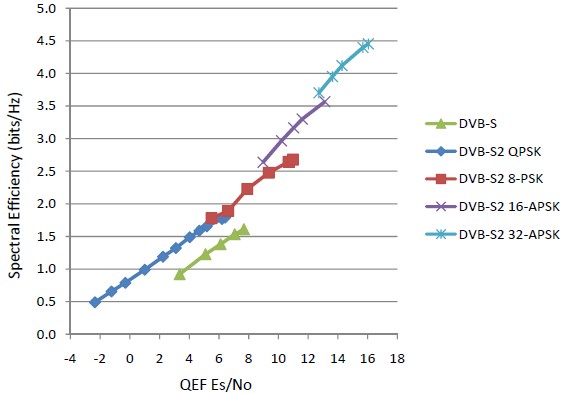 The migration from DVB-S to DVB-S2 may be applied to an operational scenario where the operating expense (OPEX) can be applied as follows:

Contours of the satellite’s footprint for an EIRP of 53 dBW in the center of the beam to as low as 45 dBW, a spread of 8 dB between the best and worst coverage areas for the satellite. If we assume that sites that fall below the 48 dBW contour have larger antennas or higher performance electronics to compensate for the lower performance, and then all sites in the 48 dBW to 53 dBW contours have the same hardware. Moving to DVB-S2 VCM shows increased performance may be realized.

A resulting link budget for each contour demonstrates the following MODCODs may be supported for a 13.33 Msps carrier occupying a partial transponder as shown in Table 1:

Table 1 demonstrates that each contour band is assigned to a given MODCOD, ranging from 2/3 16-APSK, supporting 35.2 Mbps down to 4/5 QPSK supporting 21.2 Mbps. An example of how the bandwidth is distributed is shown in Table 2.

By spreading the bandwidth over five MODCODs, the resulting increase in overall throughput has increased as follows:

The migration from DVB-S to DVB-S2 VCM may be applied to an operational scenario where the operating expenses (OPEX) can be applied as follows:

Assume 18 MHz at $4,000 per MHz on a multi-carrier transponder would result in a monthly cost of $72,000. If we utilize five MODCODs as shown in Table 2 and allocate the available bandwidth by 1/5 to each type of site, the resulting increase in bandwidth from DVB-S2 CCM of 21.2 Mbps to 27.2 Mbps provides an increase of 6.0 Mbps at no additional increase in OPEX. The resulting efficiency goes from 1.18 bits/Hz to 1.51 bits/Hz, resulting in a monthly OPEX from $3,390 per Mbps to $2,649 per Mbps.

DVB-S paved the way for a unified satellite transmission standard that has proven to be a viable architecture and embraced by the broadcast industry. DVB-S2 provides a significant improvement in efficiency (bits/Hz) and has features such as VCM to further improve utilization of bandwidth resulting in additional improvement in OPEX. Further, by segmenting the carrier into to discrete MODCOD bins allows sites assigned to the inner contours to more efficiently utilize bandwidth, resulting in higher overall efficiency of the allocated bandwidth.

TBS6925 is a professional DVB-S2/S TV Tuner, it supports CCM, VCM, ACM mode, multiple Transport Stream receiving and Generic Stream capture. You can set up it to watch satellite TV on your PC on windows or Linux Ubuntu OS.

You may like:
1.How to Use the TSRecorder Tool to receive CCM, VCM and ACM signals
2.How to Use TBS6925 watch satellite TV with XBMC and MythTV
3. How to Run TBS 6925 Digital Tuner card on Linux and Ubuntu
4.Special Satellite Frequency that TBS6925 can receive