A TV tuner card is a computer component that allows a computer receives a television signals and transponder the data .It is a kind of television tuner. Most TV tuners also can be used as video capture cards. They have been incorporated in such a way that you can record Television programs into a computer’s hard disk drive. 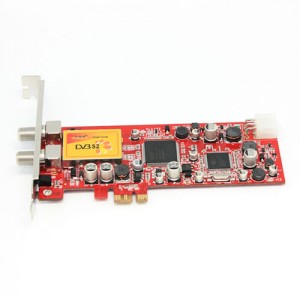 The interfaces for TV tuner cards are most commonly either PCI tv tuner cards or the newer PCI Express (PCIe) tuner cards .but PCMCIA, ExpressCard, or USB devices also exist. In addition, some video tuner cards double as TV tuners, notably the ATI All-In-Wonder series. The card contains a tuner and an analog-to-digital converter (collectively known as the analog front end) along with demodulation and interface logic. Some lower-end cards lack an onboard processor and, like a Winmodem, rely on the system’s CPU for demodulation.

There are currently four kinds of tuner card on the market:

Analog television cards output a raw video stream, suitable for real-time viewing but ideally requiring some sort of compression if it is to be recorded. More advanced TV tuners encode the signal to Motion JPEG or MPEG, relieving the main CPU of this load. Some tv cards also have analog input (composite video or S-Video) and many also provide FM radio.

External TV tuner card attachments are available for mobile phone handsets like the iPhone, for watching mobile TV, via TV stations on 1seg in Japan (SoftBank), and for soon for the proprietary subscription-based MediaFLO in the U.S. (Qualcomm). There is also a “converter” for watching DVB-H in Europe and elsewhere via WiFi streaming video (PacketVideo).

Video capture cards are a class of video capture devices designed to plug directly into expansion slots in personal computers and servers. all comply with one of the popular host bus standards including PCI, newer PCI Express (PCIe) interfaces. These cards typically include one or more software drivers to expose the cards’ features, via various operating systems, to software applications that further process the video for specific purposes. As a class, the cards are used to capture baseband analog composite video, S-Video, and, in models equipped with tuners, RF modulated video. Some specialized cards support digital video via digital video delivery standards including Serial Digital Interface (SDI) and, more recently, the emerging HDMI standard. These models often support both standard definition (SD) and high definition (HD) variants.

While most PCI and PCI-Express capture devices are dedicated to that purpose, Most, but not all, video capture cards also support one or more channels of audio. Some twin tuner cards allows  user simultaneously receive dual TV channels, this enables the user to watch one channel from one transponder/satellite while recording another channel from a second transponder/satellite. Alternatively the user can use one channel for data download while watching TV on another channel at the same time. There are many applications for video capture cards including converting a live analog source into some type of analog or digital media, (such as a VHS tape to a DVD), archiving, video editing, scheduled recording (such as a DVR), television tuning, or video surveillance. The cards may have significantly different designs to optimally support each of these functions.

One of the most popular applications for video capture cards is to capture video and audio via satellite, which can be called as the satellite tv tuner card. First, the signal is received through the receiver’s antenna. This antenna or aerial as is commonly referred to; is connected to the receivers Tuner. Then the data can be transponder via the tuners and get to the CPU. It effectively replaces the set-top box with higher quality and flexibility. The signal will be more stable and you can have more initiative.

Related Articles:
1.What is HDTV Decoder
2.How to set up a TV Tuner Card for Computer
3.How to Install a QBox USB DVB-S2 TV Box on a Computer
4.Watch Satellite TV on your Pc By using A TV tuner Card