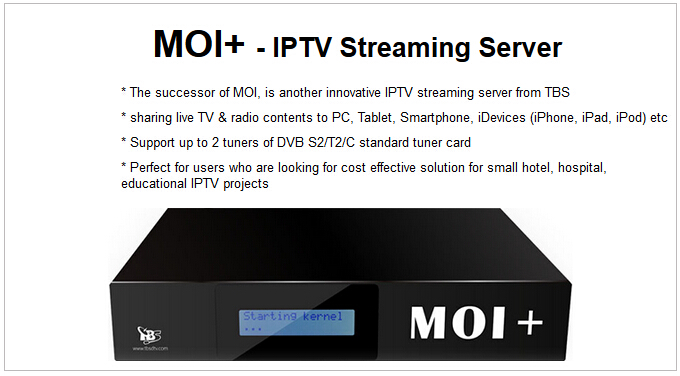 MOI+ IPTV Streaming Server provides more flexibility, it’s not limited to DVB-S2, it allows you to connect one PCI Express tuner card with the main board through the PCIe adapter, no matter you need DVB-S2 tuner for satellite TV, DVB-T2/T tuner for terrestrial TV, or DVB-C tuner for cable TV, you can find the right one from a wide range of TBS PCIe tuner cards.

There are four options of MOI+ IPTV Streaming Server :

MOI+ Box(Without any tuner, bare device)
Designed for users who already owned TBS cards and are able to re-assemble them as IPTV streaming server 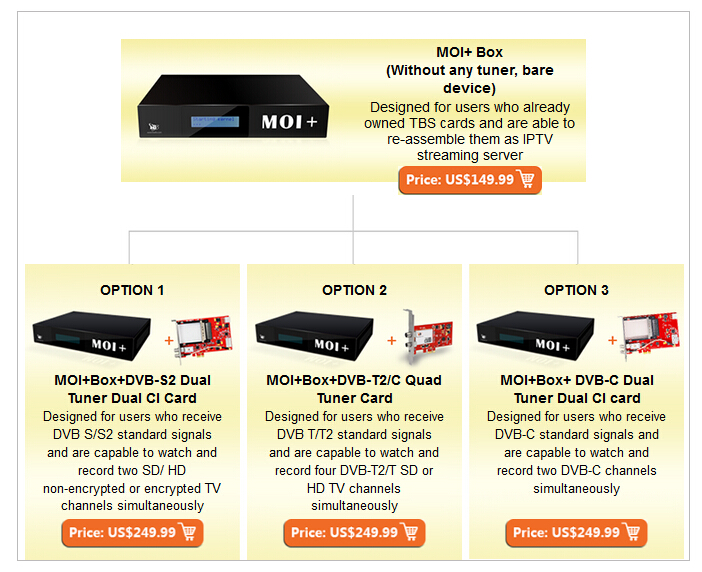 Step 1:  Make sure which DVB signal you might receive in your region . Most of common standard is DVB S2/ DVB T2/DVB C

Step 1: Choose the DVB S2 /DVB T2 or DVB C MOI+ IPTV Streaming server.  It can connect via wired or wireless network to stream the Live TV to your PC, Tablet, Smartphone, iDevices (iPhone, iPad, iPod) or Sony Playstation 3 and other client devices. 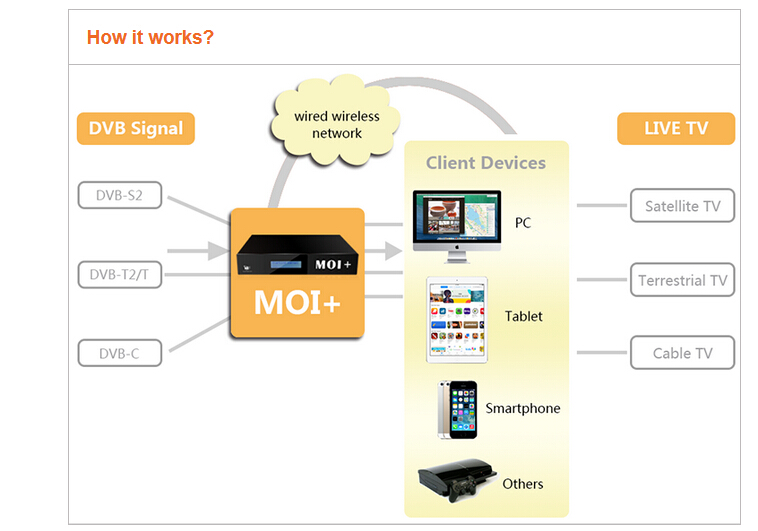 -step 1. choose DVB standard:
You need to know what DVB standard(s) can be used in your region, for example, if you are located in Germany, you can use DVB-S2 for satellite TV, if you live in the UK, you probably want to use DVB-T2/T for terrestrial TV (Freeview).

-step 2. choose a tuner card:
After you decide for a DVB standard, for example DVB-S2, there are a few cards to choose from – single, dual or quad tuner card, tuner card with or without CI slot. If you are going to build a streaming server system and need encrypted TV channels, it’s recommended to use the dual tuner dual CI card TBS6991SE. If you need only FTA (free to air) channels, you can use the TBS6991SE, TBS6982 or TBS6985.