IPTV showed “exceptional” growth in the 12 months to March of this year, with the number of worldwide subscribers increasing by over 34% in the period to reach 48.2mn, according to new figures announced by the Broadband Forum.

In a report compiled for the Forum by Point Topic, France was found to still be placed at the head of the table of top ten countries in terms of IPTV subscribers, with China a close second and Taiwan also now on the leader board in ninth place. 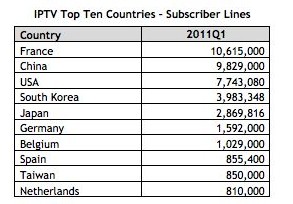 Europe continues to be the top-performing region for IPTV with over 21mn subscribers, but Asia is catching up fast with 18mn, and both China and Taiwan are showing annual growth rates of more than 50%. Out of the 2.9mn new IPTV subscribers added worldwide in the first quarter of this year, 1.4mn came from Asia, according to the report.

The report also found that the number of fixed broadband subscribers worldwide increased by 2.9% on a consecutive basis in the first quarter of this year to reach 15.2mn, giving the biggest quarterly increase in the last two years.

Asia remains the fastest-growing region for broadband subscribers, with a growth rate of 16.2% in the 12 months to March of this year – almost double that of the Americas. Asia’s fixed broadband subscribers now make up 42% of the global total, up from 40% last year, with Europe and the Americas coming behind with 30% and 25% respectively. Emerging markets are also believed to be making strides, with the Middle East and Latin America advancing quickly.

The strong Asian broadband growth is believed to be due in part to the continuing success of broadband in China, with 42% of the net additions in the first quarter of this year coming from China and its territories (the Special Administrative Regions of Hong Kong and Macau).

In terms of access technologies, fibre (including various hybrid DSL/fibre rollouts) is by far the fastest-growing, with an increase in its subscriber base of more than 20% in the 12 months to March 2011. DSL and cable are also believed to still be growing, and for the first time fixed wireless access (FWA) as a technology is beginning to take off, according to the report.

With the rapid development of IPTV subscribers, it has also pushed forward the related industries and new DVB products. Some young but potential companies have gradually developed their own unique products with the high technology. One of the outstanding examples is Tenow. This young team has managed to write an impressive success story in just a few years, with self developed application and above all a focus on innovative products, it has gained a great reputation in digital industries. Now let’s have a look at the latest featured products;

1.       TBS 6984 Quad Tuner card—IPTV providers in particular are waiting for this card, it offers 4* DVB s2 transponders. Four channels can be received at the same time from up to four different satellites.

3.       TBS 5980 USB Qbox with CI—This is intended to used for connection to a laptop: DVB S2 CAM box with USB, it would let you watch PayTV channels on your laptop.