DVB-S2 is the abbreviation of Digital Video Broadcast Satellite Second Generation, which is designed as a successor for popular Digital Video Broadcast (DVB-S) standard.  It was developed in 2003 and gained worldwide popularity in 2005. It is base on DVB-S and the Digital Satellite News Gathering standard and used by mobile units for sending sounds and images from remote locations world-wide back to their home television stations. DVB-S2 receiver is envisaged for broadcast services including standard and HDTV, interactive services including Internet access, and (professional) data content distribution. The development of DVB-S2 coincided with the introduction of HDTV and H.264 (MPEG-4 AVC) video codes.

Compared to the DVB-S standard, there are two new key features that is superior than the first generation.

* A powerful coding scheme based on a modern LDPC code.

As the test reported, the DVB-S2 performance gain over DVB-S is around 30% at the same satellite transponder bandwidth and emitted signal power. When the contribution of improvements in video compression is added, an (MPEG-4 AVC) HDTV service can now be delivered in the same capacity that supported an early DVB-S based MPEG-2 SDTV service only a decade before. Other features include enhanced modulation schemes up to 32APSK, additional code rates, and the introduction of a generic transport mechanism for IP packet data including DVB S2 MPEG-4 receiver, while supporting backward compatibility with existing MPEG-2 TS based transmission. 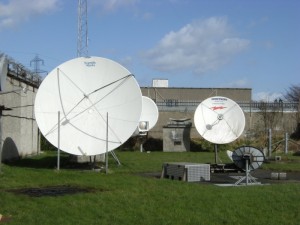 * The native stream format for DVB-S2 is called Generic Stream (GS), and can be used to efficiently carry IP-based data, including MPEG-4 AVC/H.264 services.

* Variable coding and modulation (VCM) to optimize bandwidth utilization based on the priority of the input data, e.g., SDTV could be delivered using a more robust setting than the corresponding HDTV service.

* Adaptive coding and modulation (ACM) to allow flexibly adapting transmission parameters to the reception conditions of terminals, e.g., switching to a lower code rate during fading.

QPSK and 8PSK are proposed for broadcast applications, and can be used in non-linear transponders driven near to saturation. DVB S2 8psk receiver is the basic usage in the non-commercial data transmission.

16APSK and 32APSK are used mainly for professional, semi-linear applications, but can also used for broadcasting though they require a higher level of available C/N and an adoption of advanced pre-distortion methods in the uplink station in order to minimize the effect of transponder linearity.

* Improved coding: a modern large LDPC code is concatenated with an outer BCH code to achieve quasi-error free (QEF) reception conditions on an AWGN channel. The outer code is introduced to avoid error floors at low bit-error rates. A single forward error correction or FEC frame may have either 64800 bits (normal) or 16200 bits (short). If VCM or ACM is used, the broadcast can be a combination of normal and short frames.

* Several code rates for flexible configuration of transmission parameters: 1/4, 1/3, 2/5, 1/2, 3/5, 2/3, 3/4, 4/5, 5/6, 8/9, and 9/10. Code rates 1/4, 1/3, and 2/5 have been introduced for exceptionally poor reception conditions in combination with QPSK modulation. Encoding values 8/9 and 9/10 behave poorly under marginal link conditions (where the signal level is below the noise level). However, with targeted spot Ku or Ka band downlinks these code rates may be recommended to prevent out-of-region viewing for copyright or cultural reasons.

* Optional input stream synchronization to provide a constant end-to-end delay.Depending on code rate and modulation, the system can operate at a C/N between -2.4 dB (QPSK, 1/4) and 16 dB (32APSK, 9/10) with a quasi-error free goal of a 10−7 TS packet error rate. Distance to the Shannon limit ranges from 0.7 dB to 1.2 dB.