The TBS6284 PCIE DVB T2 quad tuner TV cardwas reviewed in the latest issue of What Satellite (a professional and authoritative satellite magazine from UK) and received a Silver award from review ranking! Thanks to Martin Pipe, the author of this review. We really appreciate your contribution and Professional evaluation. Now we would like to share this great review with our TBS fans!

We’ve certainly come a long way since the earliest days of digital terrestrial TV reception on PCs. And yet not so long ago the idea of getting this new-fangled digital TV malarkey on your desktops. Generally with a mammoth PCI card full of “chippery”, was quite a novel one. With the supplied software you could also record programmers onto your PC’s hand disc-thereby effectively converting it into a PVR at a time when there these not commonplace items. Now the average modern PC has a hard disk measured in terebytes. And there are a lot more digital terrestrial channels to choose from a handful of which are broadcast in high definition.

To make the most of this we have the unique TBS6284- a card with no fewer than four terrestrial tuners on board. That means you can record three (or more) channels while viewing a fourth. Better still, all four tuners are compatible with not only the established DVB T standard but also the newer DVB T2 technology that carries HD channels. Like its satellite equivalent, the TBS6984 DVB S2 Quad Tuner TV card, it takes the form of a PCI expressx1 card. Most of PCs made over the past five years should be compatible with such hardware.

The TBS6284 is purely a tuner, for encrypted channels your PC must be equipped with the necessary conditional access(CAM) hardware and software, The card, which is 80mm tall and thus might not fit in some slimline cases, splits its tuners into two pairs-A/B and C/D-each of which has its own input and output.

Using a supplied patch cord the output from first pair of tuners can supply signals to the input of the second-and so you might only need one aerial cable. In contrast, the TBS6984 needs separate LNB feeds for each tuner, owing to its need to independently switch band and polarization, and the single UHF band used for broadcasting doesn’t need switching, The only other rear-panel connector itself a 2.5mm mini-jack for an infrared sensor, which works with the supplied handset. On the board it lurks an optional power connector that’s interface to your computer’s power supply if the motherboard’s PCI-Express slot is incapable of supplying enough current. It’s highly unlikely that you will need it (and in any case it’s not even referred to in the documentation)

Also supplied in the package is a mini CD-ROM that contains the drivers. These support Windows2000,XP, Vista and 7 and Media Center can deal with a maximum complement of four digital tuners(certainly if you are using Window7). Thanks to their BDA compliance, the drivers allow the tuners to work with a wide variety of third party software such as the full version of popular DVBviewer,Progdvb, media portable. The TBS6284 will also courtesy of its manufacturer’ wise decision to cater for Linux-appeal to those who hope to build an open source PVR around software like MyrhTV, VDR

In additional to the drivers a small collection of application software is included. These programs are TBSViewer(a cut-down version of DVBViewer), an OEM version of DVBDream(an alternative to DVBViewer) and TBSVHID(which maps handset buttons to the appropriate keyboard commands of your digital TV software). Sadly, none of these programs id documented with the exception of a DVBDream help file.

Getting the card into our Yoyotech quad-core Window7 PC and installing the drivers from CD-ROM was straightforward. Setup will depend on the application, but TBSViewer and DVBDream were easy enough to drive, The tuning menu of most software gives you control over the range of frequencies to be scanned(the TBS6284 will deal with VHF and as well as UHF channels）and the channel bandwidth(8MHZ in UK). You can usually also turn off one or more of the tuners, if desired.

For standard-definition viewing with the supplied software, a Pentium 4 processor will suffice, but if HD is envisaged you will need a multi-core processor with a copy of DVBVivew GE, which supports the reception of multiple programmers from each tuner if they are in the same multiplex, we were able to record no fewer than nice channels simultaneously, That should be more than enough for anybody.

The TBS6284  DVB S2 Card worked superbly. Its sensitivity was judged to be better than that of many DVB-T cards. Even the Crystal Palace HD channels, which will be carried with lower power until switchover (a couple of months, always at the time of writing) is complete, were received without glitches in our Lssex location, It worked very well with Microsoft Media Center, DVBDream and TBSViewer, the four tuners yielded the kind of recording and viewing flexibility that is currently impossible with set top PVRs

The TBS6284 is not cheap, but if you do need such power (in a professional capacity perhaps) there is nothing around to touch it, you need never miss another program again. 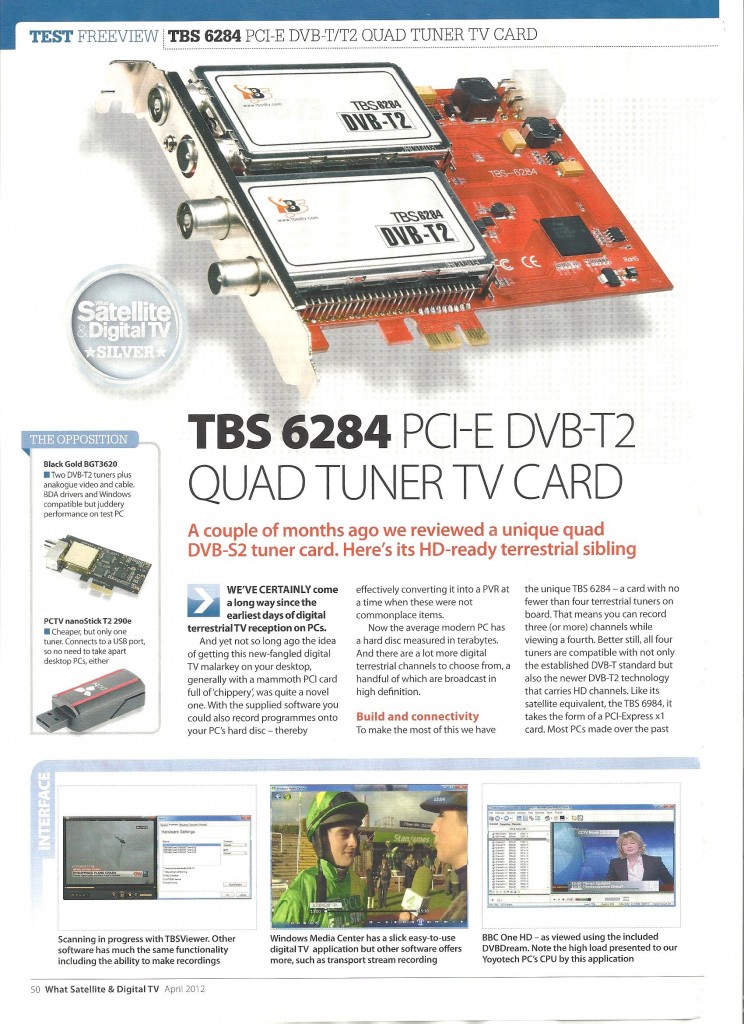 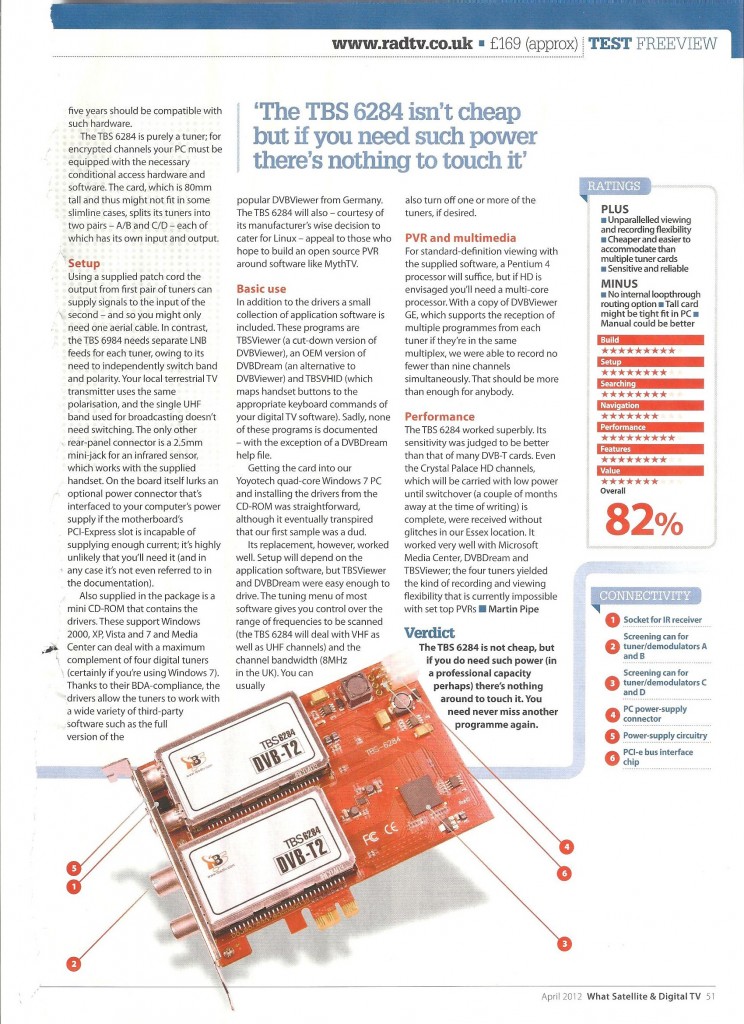