The reason I wanted to write this review

I’m a long time satellite TV hobbyist, having having had a large C-band dish for a couple of decades now (I’ve acquired a few additional C-band and Ku-band dishes since then). Some think that satellite TV as a hobby is dead, but it really isn’t. There are still many signals up there, but if you’re still trying to make an old analog satellite receiver work, you’re not going to see much. Sorry, my friend, but the world has gone digital, and now you need a digital satellite receiver to see all the free TV in the sky.

You could go out and buy a standalone receiver for the purpose, but in most cases you are limited to connecting it to one TV set. If you hook it up to the TV in your Living Room, then you’ll need extra wiring and maybe a switch to also enjoy it in your bedroom. If you want to be able to watch the satellite signals you receive in any of several rooms of your home, or on your computer, tablet, or phone, that’s going to be rather difficult with a standalone box.

A couple of years ago, I acquired a HDHomeRun Dual device, and discovered how nice it was to be able to stream terrestrial TV signals to anywhere in my home via my local network. I set up a backend system so that I could record programs and enjoy watching them at my convenience. I wondered if it was also possible to do the same thing with the signals I received off my satellite dishes. So earlier this year I attempted to build a backend system that could receive free-to-air satellite signals and stream them to the various computers around my home, including the home theater PC’s that are connected to my HDTV receivers. Let’s just say that the first attempts didn’t work as well as I’d hoped. There is a huge learning curve, particularly if you’re not a programmer nor otherwise particularly geeky, and sometimes the hardware and the backend software just won’t cooperate.

Then I stumbled across a page on the TBS MOI+. I suspected that it might be able to accomplish what I’d been trying to do, and in a lot smaller package. So, I went online in an attempt to find some reviews on this device. To my surprise, little has been written about it, particularly in English. So, hoping to fill that gap, I contacted TBS and asked if they might be interested in providing a unit for review purposes. They graciously consented, and this review is the result. Just so you know, I did not promise to write only nice things about the unit, and I’m not getting paid anything for this review, beyond receiving the MOI+. So, this will be as honest of a review as I can make it. 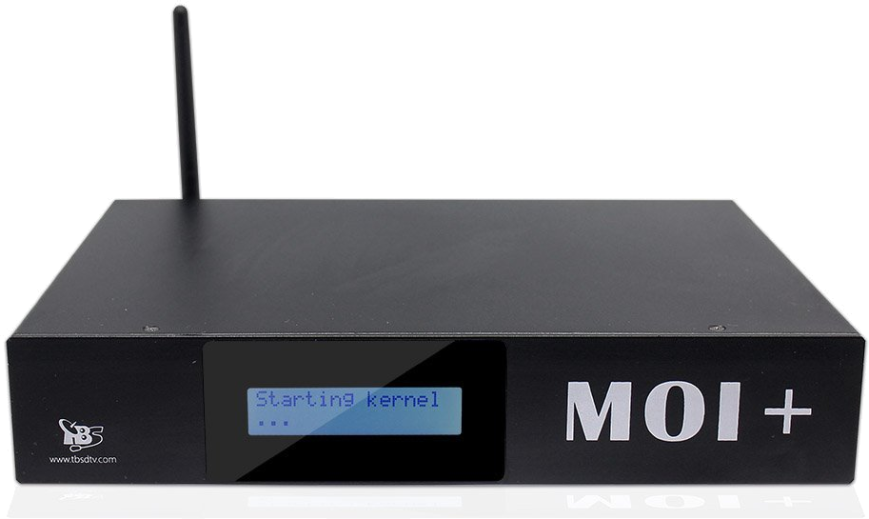 The TBS MOI+ IPTV Streaming Server is a standalone unit that streams satellite TV signals over your local network to PC’s, tablet computers, or phones, and with a small bit of effort can also function as a PVR. It runs Linux and has two different flavors of backend software installed, VDR and TVHeadEnd (actually, those are the only two that can be configured from a web browser, but the MOI+ also includes Mumudvb and DVBlast for more specialized applications). Therefore it can serve as a PVR or live streaming backend for Kodi (formerly known as XBMC), the popular multi-platform software that can turn almost any modern computer or tablet into a magic video box, and to other software clients that can receive such streams.

Please keep in mind that the MOI+ is not a standalone receiver – you cannot hook your TV directly to it, since it has no HDMI port. However, you can watch the received signals on a TV connected to a PC (some “smart” TV’s may be also be able to receive the streams directly). The sole purpose of the MOI+ is to receive and stream live and recorded satellite TV signals to other devices in your home. Outside of North America, it may also be able to receive terrestrial TV signals, depending on the region and the card installed.

As the unit is currently supplied in North America, it includes a TBS6991SE Dual Tuner Card with two CI slots. The description for that card states that “Inserting the correct CAM and subscription smartcard into the CI slot makes it possible to watch encrypted pay TV.” Unfortunately, that does not mean you can use it to receive North American commercial services such as Dish Network, DirecTV, Bell Expressvu, Shaw, etc. since they use a different authorization method that only works with their equipment. However, that particular card also works very well for receiving Free-To-Air satellite signals, which are available here in North America.

You can remove the supplied card and replace it with any of several other TBS PCIe cards, including the TBS6905 DVB-S2 Quad Tuner PCIe Card, in the event that two tuners aren’t enough for you.

I tested the unit using the supplied card, and I connected it using wired Gigabit ethernet. I’m not a big fan of using WiFi for streaming video, although the MOI+ has that capability.

The first thing I will say it that in my testing, it was able to flawlessly stream every free-to-air signal that I was able to receive, including a difficult 4:2:2 signal. With both tuners in use, and the device streaming previously recorded content to one computer, CPU usage was nowhere near being maxed out. As long as the tuner could lock onto the signal, the channel could be streamed or recorded.

The specifications for the MOI+, taken from their product page, are as follows:

System
SoC: Marvell 88F6282 1.6 GHzCPU: Sheeva CPU core V5TE ARMRAM: 1GB DDR3Flash: 512MB NAND Flash
Interface
2x USB 2.01x SATA portEthernet: 100/1000M Gigabit EthernetWifi: 802.11nProtocol: HTTP, UDP, RTP, TCPOS: Linux
Preinstalled software
Tvheadend, VDR, Mumudvb, DVBlast, szap, tzap, czap, dvbdate, dvbnet, dvbscan, dvbsnoop, dvbtraffic, dvbscan, scan-s2, szap-s2, dst_test, telnet, ssh, sftp, samba, oscam
Client end support
PC: Windows, Linux, MacTablet: Android, iOSSmartphone: Android, iOS
DVB tuner support
DVB-S2/S: 1 tuner card DVB-T2/T: 1 tuner card DVB-C/J.83B: 1 tuner card
Note that the unit will only accept one tuner card, and in the United States or Canada only a DVB-S or DVB-S2 card would be useful, but you would probably want a DVB-S2 card (which also receives DVB-S signals), since quite a few channels have converted to DVB-S2 in recent years.
The specifications note that there is a SATA port on the unit. That is true, but you have to remove the cover of the unit (which involves removing six tiny screws) to get at it. Unfortunately what is not available is a way to mount or power a SATA hard drive. There is enough room inside the unit for a notebook-style thin SATA hard drive, but there are no mounting holes or brackets. There is a connector on the main board that is not used, and its purpose isn’t identified, and it might in fact be a power connector, but I couldn’t be sure. So, when I hooked up a hard drive, I simply ran a SATA cable out the back of the unit, through the card slot opening, and connected it to an external SATA drive using a separate external power supply. This arrangement seems to work quite well.
This is a picture I took of the inside of the unit – sorry about the flash glare but I’m not a professional photographer. In this photo, the SATA connector is on the main board (the one on the left), just above the TBS logo. The unknown connector that might be power is above it, near the top edge of the board in this photo, next to the LAN port: 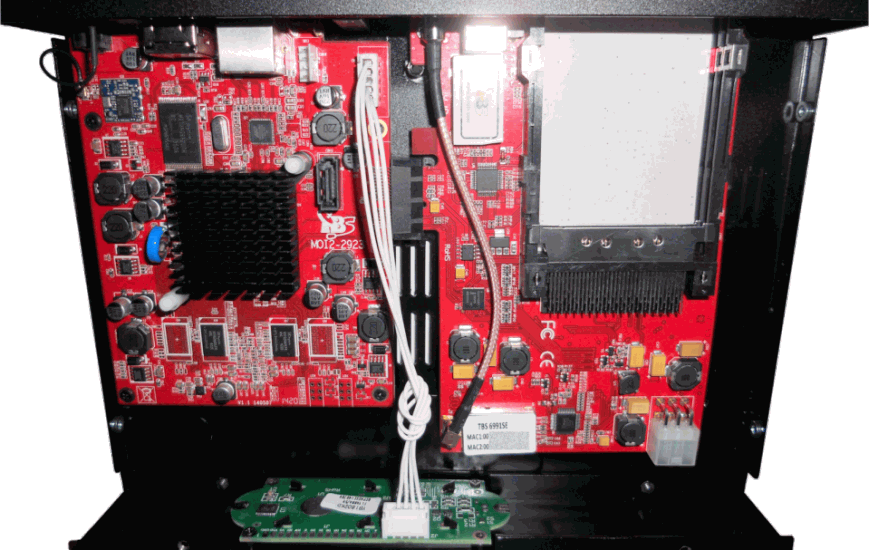 The published specifications don’t mention anything specific about the operating system, but the MOI+ appears to be running BusyBox, which describes itself as “The Swiss Army Knife of Embedded Linux.” BusyBox has become a rather popular on small devices such as this, and it offers much of the functionality found in larger Linux-based operating systems.The preinstalled software includes the following:

I suspect that most non-commercial purchasers of the MOI+ in North America will use either TVHeadEnd or VDR almost exclusively, and rarely touch the other software, except for the software that enables local network connections to the server.

Unfortunately, the MOI+ does not appear to include any software that will do true “blind scanning” of satellites (that is, software that will find all of the transponders, and the services contained within them, on a given satellite). With both dvdscan and scan-s2, you can only scan a single transponder, and you must enter the frequency of that transponder.

Setting up the MOI+

The MOI+ is what I would consider about average in terms of setup difficulty. Connecting up the hardware is easy, you simply connect your wires from your LNB(s) or switch(es) to either or both of the tuner inputs. There is an ethernet cable supplied with the unit and you connect that to your router or switch, or if you want to use a Wi-Fi connection you simply attach the included antenna.

When you power up the MOI+, it flashes a number of messages on the front panel display, but the one you will initially be most interested in is the IP address of the unit. It will grab an IP address via DHCP and you can then go to any computer on your network and browse to that IP address to verify that the unit is working and accessible via the network.

My husband works a lot in the office and I became tired of fighting with him about those snacks during working time. After our visit to the doctor he recommended us to use phenterminehealth.com to kill the bad habit. Two weeks were enough, so don’t be afraid if doctor recommends it to you.

At this point, before you do anything else, I suggest you upgrade the unit’s firmware. The reason for doing this now is that whenever you upgrade the firmware it essentially performs a factory reset and you lose your existing settings, so there is no sense configuring anything until you have the latest firmware installed. The instructions for updating the firmware are in the first post in this thread, or after you have performed the initial firmware update, you can browse to the MOI+ IP address and click the button that says “Update Guide”. Note that you’ll need a USB flash drive with at least 1 GB of space, preferably formatted in FAT32 format (Linux formats such as EXT3/4 may or may not work). I do recommend copying all three of the mentioned files to the flash drive, so that all are updated. Note that you have a choice of kernels, one supports cards with DVB-S2 + DVB-T2 and the other supports cards with DVB-S2 + DVB-C. In North America you are not likely to be using a card that receives anything other than DVB-S2, so you can use either kernel, since both include DVB-S2 support. So copy either one of the kernel files, plus the other two mentioned files, to your flash drive.