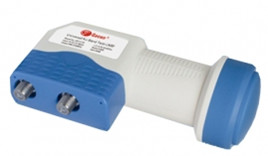 How to Set a Twin LNB to two Satellites?

2. Screw the coaxial cable into the coax output of a DiSEqC switch. Loosen the screws on the side of the Twin LNB module with the hex wrench. Place the DUO LNB module on the end of the lateral support pole. Rotate the front of the dual LNB module so that it is facing the dish. Tighten the screws.

3. Screw one end of a 3-foot coaxial cable to the coax connector on the twin LNB module. Screw the other end to the coax input on the DiSEqC switch.

5. Turn the receiver on from standby with its remote. Press the “Menu” button. Select the “Point Dish/Satellite” screen from the “System Setup” menu. Enter your zip code in the appropriate field to bring up a list of satellites. Select two adjoining satellites from the list provided that correspond to your location.

6. Have a person stand by the screen with a cell phone. Go to the satellite dish and call the person on his cell phone. Release the two locking knobs on the side of the bracket holding the satellite dish in position. Raise and lower the dish until you are told that one of the two satellite meters has reached its highest point. Lock the knob controlling raising and lowering the dish. Repeat this action with a lateral movement of the dish until the second satellite’s signal is also as high as possible. Lock down the other knob.

Gecen Universal Twin LNB is on hot sale at our buydvb online shop, is used to feed up to two different receivers. This a high stability, high gain, yet low noise figure single LNB allows reception of Ku band signals with the highest possible signal level and quality.

1.How Does a DiSEqC Switch Work?