The Android Mini PC MK802 is a PC-on-a-stick,it based on an ARM architecture, composed of an ARM V7 based Cortex A8 1 GHz processor, a Mali-400 MP GPU and a housemade VPU CedarX able to decode 2160p video.

It has been dubbed as “the smallest Google TV player”, and is a thumbsize device with which you can turn a computer into a television, It can also be used as a light internet and office computer by installing a Linux distribution like Ubuntu or Lubuntu.It looks like an ordinary USB flash drive. Housing a processor, RAM, storage, and I/O ports, it can perform like an ordinary computer.

It’s actually pretty easy to convince MK802 Mini PC Box to run an alternate operating system. In fact, if you have a properly prepared microSD card, all you need to do is insert the memory card, turn on the MK802, and it will boot Ubuntu 10.04 Linux.

Update: You can also run Ubuntu 12.04, Puppy Linux, or other operating systems on the MK802.

Ubuntu boots very quickly on the little computer, although performance is a little on the slow side. That’s not surprising, given the MK802′s relatively anemic hardware. It has a 1.5 GHz Allwinner A10 ARM Cortex-A8 processor and 4GB/8GB of storage — pretty much what you’d expect from a 2010-era smartphone.

While the MK802 won’t win any speed awards, it’s pretty impressive that this mini pc can run a full desktop-style operating system at all. While it takes a kind of long time to launch some apps such as OpenOffice.org and Firefox, they all work pretty well once they’re up and running.

How to install Ubuntu 10.04 on a microSD card

The easiest way to install Ubuntu Linux is to grab a disk image prepared for the Mele A1000, another inexpensive device with an Allwinner A10 processor, and then write it to a 4GB or larger microSD card.

Here’s how to do that. These instructions will assume you’re working with a Windows PC, but the steps should be similar if you’re using a Mac or Linux computer.

1. Download the mele-ubuntu-lucid.img.lzma disk image from the links at rhombus-tech.net or Linux Questions.

2. Extract the mele-ubuntu-lucid.img file to a folder on your computer. You can use 7-zip or another utility to do this.

3. Insert a 4GB or larger microSD card into your computer.

4. Download and unzip Win32 Disk Imager to your PC.

6. Choose the drive letter for your microSD card in the “Device” area and choose the mele-ubuntu-lucid.img file for your “image file.” 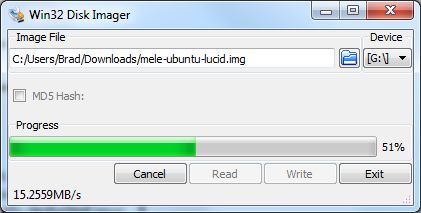 After a few minutes the process will complete and your microSD card should be prepared with Ubuntu 10.04.

If you’re using Mac or Linux, you can find instructions for writing a disk image to an SD card at NookDevs. Note that the site recommends using an app called WinImage.exe for Windows — but I had no success with that method and found that Win 32 Disk Imager worked better.

Now that your microSD card is prepared, you can insert it into the TF card slot on the MK802. TF is just another name for microSD.

Theoretically all you have to now is connect a display, power source, mouse, and keyboard and you should be good to go.

But the first time I tried this, my MK802 booted into Android instead of Ubuntu. I ejected the microSD card, inserted it again, unplugged the power and plugged it back in and second time was a charm — Ubuntu loaded a few moments later.

There are few more things you need to know though:

When you hit the login screen you have two options for logging in:

WiFi will not work out of the box. But it’s very easy to enable. Just login as root, open a terminal window, and enter the command “depmod -a” (without quotes) and hit enter. When that’s complete, use the Ubuntu system menu to restart the computer.

The MK802 simply freezes every time I try to actually shut down Ubuntu (or Android, for that matter), but the restart option seems to work just fine. Once you’ve restarted the operating system WiFi should work.

We’re still in the early days of MK802 hacking. Ubuntu 10.04, for instance, is about two years old at this point. It should be interesting to see if people can get newer versions of Ubuntu or other Linux-based operating systems to run on the hardware.

Light-weight Linux distributions that work well with smaller amounts of RAM such as Bodhi Linux or Puppy Linux could also be interesting.

The MK802 with Ubuntu also ran into some display issues — the edges of the operating system didn’t fit on my 1920 x 1080 pixel display. That’s because the MK802 seems to only want to output at a 720p resolution (whether running Android or Ubuntu). Theoretically it should be capable of higher resolutions, but it might take a little work to enable them.