IPTV or IP Television is a process, a method of preparing and distributing television signals over an IP based data network. Content streams are acquired, demodulated and decrypted if necessary, then re-encoded digitally for IP transport possibly with additional compression and new encryption. IPTV signals, or streams, are distributed on an IP based network and viewed on a IPTV capable viewing device, usually a Set Top Box. With multi digital TV Tuner cards, you can build a TPTV server and transfer the data to the end users.

Note: This article discusses building and operating a complete headend, for the purpose of competing with or replacing a traditional CATV service, to provide coverage to a metro or regional area.

The key steps to delivering IPTV to the end user 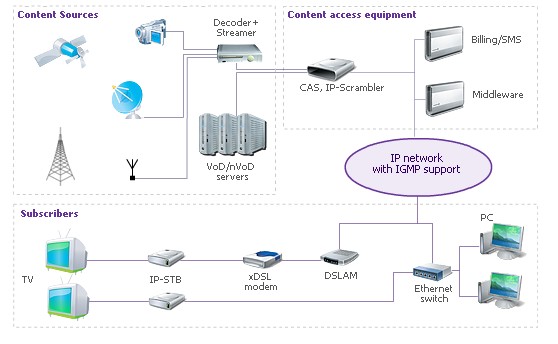 Acquiring the Programming – The vast majority of this content will be received via satellite, requiring a headend facility. Additional content, local network affiliates, may be received off-air in either analog or digital off air format, or even terrestrially, as an ASI or SDI stream provided over fiber optic transport from a nearby broadcaster.

In the mostly digital environment, the receiver will be connected to an input from the satellite dish or splitter. The receiver will be tuned to a transponder, which represents a frequency or a channel. Other settings, such as symbol and forward error correction rates must be set, as well as other technical settings as per the requirements of the programmer’s uplink operations center. The receiver will demodulate the stream or streams, and it will decrypt the encryption that the programmers have used to protect their intellectual property for the trip to outer space and back. The programmers designate the type of encryption used, and this in turn dictates the receiver manufacturer and sometimes the model. The digital output of the receiver is the Asynchronous Serial Interface (ASI). ASI is a compressed format designed to carry multiple MPEG2 streams.

Encoding the streams– The digital or analog content that has been received has to be re-encoded for multicast IP transport. This stage would also encompass the encryption that will be required by the programmers. These digital outputs from the various receivers will be injected into an encoding device to be assigned a multicast IP address. In a standard definition environment, these streams can be encoded in MPEG2 format or in MPEG4 format. The higher cost of MPEG4 encoding equipment encourages the encoding as MPEG2 if sufficient bandwidth on the distribution network is available. We will discuss this in detail later on. If the content in question is High Definition (HD), then without question it will need to be encoded in MPEG4 not to overwhelm the distribution network.

IPTV Distribution Network – The distribution network obviously needs to be some kind of wide area network, as it needs to deliver IPTV services to the customers’ homes. This network needs to have adequate bandwidth with the ability to implement Quality of Service (QoS) to the end users to deliver IPTV content. These requirements can be attained with the mixing and matching of many current technologies.
Middleware –Middleware is the glue that holds the IPTVSP together. Without the middleware the

IPTVSP has a lot of expensive but useless equipment. It may have been noticed that up until this point in this series all reference to content has been identified as streams, not channels. This effort not to address streams as channels was directed toward this purpose; without middleware there are no channels, just streams. The end user, the television customer, expects a user friendly viewing experience. Typically presented in the form of an Electronic Program Guide. The middleware presents this to the viewer via the Set Top Box.

IPTV Viewing Device – This is generally considered to be the Set Top Box, not too different in appearance from the STB provided by the cable company for their digital service tier, or the STB included with a home satellite package, which is also a satellite receiver. The IPTV STB works hand in hand with the middleware.