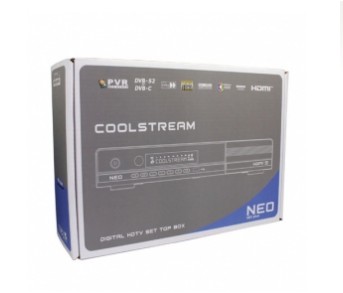 (DTR), bursting with satellite TV recording features to capture the incredible color, sound and crystal clear images of SD and HD channels from the satellite TV reception. The Coolstream NEO SAT also gives you access to over hundreds of TV and radio channels including other services such as BBC iPlayer for the ultimate viewing experience. The sparking feature of the Coolstream NEO Sat works greatly with Linux and Engima 2 system. It would be a great choice for Linux and Engima 2  users.

Boasting a optional hard disk drive (Optional: 250GB/320GB/750GB/1000GB), the Coolstream NEO SAT can store up to 120 hours of HD programming or up to 300 hours of standard definition shows so you’ll never miss that crucial episode of your favourite show. The Coolstream NEO SAT is perfect for those households where arguments over the remote control are guaranteed.

The Coolstream NEO is a low-cost Satellite Receiver based on the open architecture of the Linux and Enigima Operating System. Perfect compatibility and great quality make it the Linux enthusiasts’ box of choice.Linux operating system and supplied pre flashed with the latest firmware.

The Coolstream NEO is jam-packed with other recording features for the satellite digital TV service:

Live pause and instant rewind –It’s easy to pause any live show and go and quench your thirst. Then come back to the TV and simply carry on wherever you left off.

Series recording – if you know you’re going to be out and about when you’re favourite weekly drama is on, it’s easy to set your Coolstream NEO to record every single episode at the touch of a button

Schedule tracking – if there’s a change to the TV schedule due to breaking news or an over-running programmer, there is no need to worry about missing anything. The Coolstream NEO will tracks the recording according to broadcast signals and ensures you receive every last second

Split recording – For those long movies with a break for the news, the Coolstream NEO will ensure it records both halves of the film to eliminate any disappointment

can start to watch it. With chase play you can start watching from the beginning even if the programmer is still being recorded

How Does a Digital Satellite Receiver Work?